So this will be where my painting blog (plog) will be for the BBBB. Ive been playing wargames for about 15 years and warmachine for about 18 months now since warhammer went 8th edition and pretty much killed my love for that game.

So when the new duel battle box came out I had to buy it. In fact I bought two and have plans of using them the be the bases for my new Khador army. I sold the other bits of to my son and ado who will be using them to base there new BBBB armies on.

So What I will be stating with is Sorcha and the Juggernaut and the destroyer. To round out my first 15 points I will buy Yuri the Ax.

Once these are done I will finish the unit of man o wars and  then perhaps the MOW solo to bring it up to 25 points.

After that I will be using the other two Jack chasis to build torch and the other will be a multi jack or maybe even a heavy conversion to make the beast. In fact I will probably magnetise the first 3 jacks so I can swap out the weapons.

With the other unit of MOW I intend to buy the arms to make the other types of MOW units.


OK so down to paint and schemes. Im a big fan of themed armies. If you want to see some of my other works check out theogrestronghold. I have a painting log there under ogrebane.

So my theme for these guys will be WWII russian. Olive green with lots of battle damage.

First pics will be up as soon as I work out how to post them. 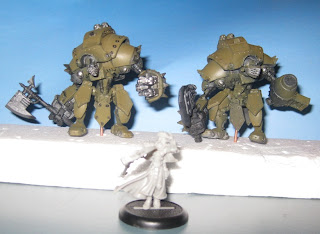