Its been awhile since I posted.

I survived yet another cancon but not completely unscathed. My first day there was just a look around. It was good to have some time to check the site out. Got into a few demo games one of which I will probably buy. Eddie and I checked out Dreadball. I love the mechanics of it. Very well thought out. The biggest problem was they weren't selling it at cancon so I couldn't get my hands on a copy. I have tried to get it online but there doesnt seem to be any copies anywhere.

Day 2 at cancon was warmachine. I lost 4 straight games due to my army being unable to play scenerios. I wont be taking Khador to tournies anymore. Half way throught my second game I get a call from my son. A tree had fallen down in a storm. He sent this pic. 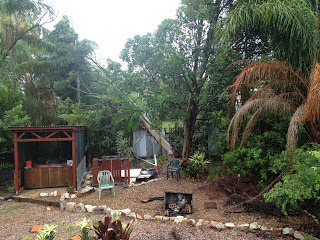 So that put a downer on my trip but I didnt let it upset the weekend.

So Monday was SAGA. We played 3 rounds with 9 players. I managed to win my second game so I dont have to take up gardening.

I played Jomsvikings which require me to have wrath in order to use my abilities. In the first game my opponent didnt allow me to build up any wrath so I lost this game 17 to 16. A close one. I could have played for a draw but I didnt get dressed up for nothing.

My second game was against Vikings. He had Beserkers. I managed to get rid of them by charging the Warlord with my warlord and with my special abilities and his atacks I got 12 hits on the warlord. He had to sacrifice his beserkers and managed to save the other 7 hits. He did this 3 times all up so I should have checked his dice. Anyway I won this game 21 - 19

The third game was against the Skralings. American indians. It was an escort mission. I had to escort a cart. I missed by an inch getting the bonus point as I was 13 inched from the table edge at games end. I lost 21 - 19 so another close game.

We left that night to go back to Brissy and stayed overnight at some numpty town.

The next day we took of and the main road was flooded so I had to take a back road. It was also flooded but I decided to let the Kia prove itself. It seems the Kia is half boat as a few times we had water coming in under the doors. Here are a few pics of the flooding. 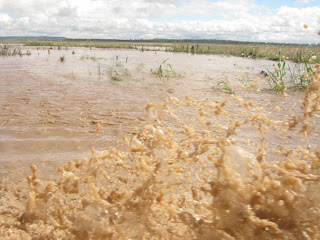 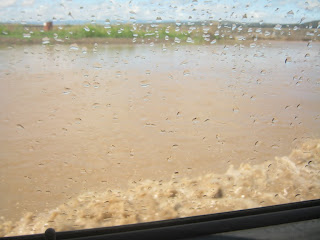 SO eventually after braving flooded roads and fallen trees we get home only for me to spent the last 2 weeks cutting down trees and fixing fences. I will put up a pic of how my yard looks now it looks ike a war zone.

Anyway next post I will put up some terrain that I have been building lately. I am thinking of building terrain to order but we will see how that goes.